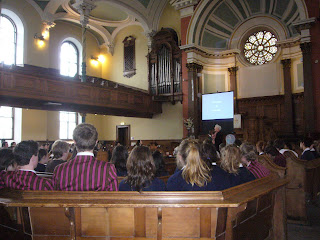 I've spoken in all kinds of places: classrooms, school halls, libraries, theatres, tents, even on the deck of the Cutty Sark, but never anywhere where the audience were sitting in pews and up in a gallery. This is St George's, Edinburgh, and it used to be a church. I was there to talk to students from various schools in Edinburgh. The space took a bit of getting used to, but it worked very well. Viv French, friend and fellow author, introduced me. I was there to talk about Fool's Girl. She's acted in Twelfth Night several times so I was really pleased when she said she loved the book. 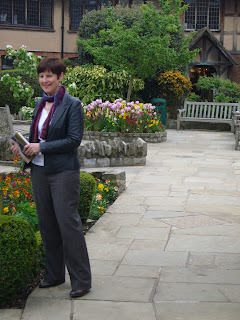 On Friday, May Day Eve, I was filming for a podcast in the garden next to Shakespeare's Birthplace. Flowers and herbs from Shakespeare's plays were all growing there - violets, pansies for thoughts, rue, bitter herb of grace, and rosemary. I was reminded of my mother, these were plants we had in our garden.
There's rosemary, that's for remembrance
pray you, love, remember.
- Hamlet

Today is her birthday. She loved Shakespeare. She named me for Celia in As You Like It and introduced me to his plays through his flowers, his songs and his verse that she could quote from memory. People ask where do ideas come from - I don't know, but sometimes I think that that come from a very deep place indeed.
Posted by Celia Rees at 18:08