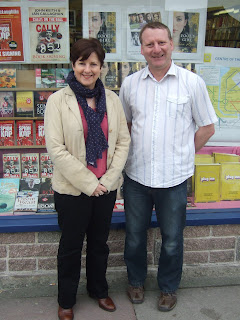 Last Monday I was at a schools event at Crosby Civic Hall, organised by Tony Higginson of Pritchards in Formby, Merseyside. Here we are outside his great independent book shop, with The Fool's Girl just visible in the window behind us. This was my first big schools' event talking about Fool's Girl but the students who had come from different schools to listen to me were hugely welcoming and very enthusiastic. I signed lots of books afterwards and one boy told me he bought the book because he really liked the idea - just what authors like to hear!

Friday, 23rd April. A special day. It was Shakespeare's birthday and I was at the Birthplace Trust in Stratford-on-Avon, talking to students from King Edward Sixth Grammar School (Shakespeare's old school) and Stratford Girls' Grammar School, which is in Shottery, Anne Hathaway's village. I was in Shakespeare Central and when you are talking about a book which has Shakespeare as a character, you can't get much better. It was an excellent day all round. In the afternoon, I attended a lecture given by James Shapiro about his new book Contested Will: Who wrote Shakespeare? This time it was my turn to get my book signed.
Posted by Celia Rees at 18:21

Hi Celia, If you google The Killing of Hamlet there's a good fiction whodunit to astound Mr Shapiro! Author Ann Morven was inspired by the authorship debate, and I posted a blog about it at booktaste.com
Regards, Cathy Macleod.