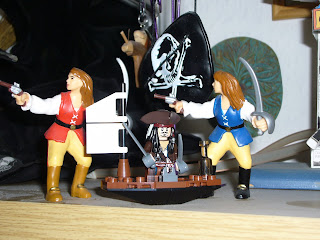 Sometimes interesting and intriguing requests drop into my inbox. A month or so ago I had an e mail from a blogger who was planning a pirate month on her web site. She asked if I would like to take part, she wanted to feature my book, Pirates!, offer some copies for a giveaway (courtesy of the publishers, Bloomsbury) and would I like to write something? She wanted me to write a piece to be called The Brawl in Triton's Tavern. I love pirates, so how could I refuse?

I decided that I couldn't add anything to the actual book. Somehow, a book is a finished thing - it is what it is - and can't have extra episodes added on to it. Besides, there is already a tavern scene in the book, so there is not really room for another. So I decided to write an episode from Pirates!, the phantom sequel. This book has never been written, but parts of it exist, in my mind, anyway. Even though I might never get to write it, I'd certainly thought about what might happen after the end of the book, but would I actually be able to go back to the time, the characters, re-visit a novel that was published eight years ago?

The answer was - no problem! It was like visiting old friends that I hadn't seen for years. They were there waiting for me. You can read the result at: http://vvb32read.blogspot.com/2011/05/triton

I really enjoyed my visit and maybe the girls will sail again one day. Who knows? Certainly looks like they are up for it!
Posted by Celia Rees at 18:17