Is the title of The Fool's Girl in German. Last week I was on what the Germans term a Reading Tour, going to various schools and venues reading from and talking about my book. I gave up German when I was thirteen, or rather it gave up on me, so it was a good thing that all the groups I met spoke excellent English.

My first visit was to the Franconian International School in Erlangen. It was a full on day of talks and workshops organised by their wonderful librarian, Elaine Smith. As it was my first gig, I admit to being slightly nervous, but the staff could not have been more helpful or accommodating and the students were attentive and full of enthusiasm. From Erlangen, I went to Munich by train. I had a fistful of tickets for various long distance train journeys. I like travelling by train and I had Christopher Isherwood's Berlin novels with me as appropriate reading.
In Munich I met another wonderful librarian, Sabine Balmer, who works at the European School. The reading went well with lots of questions. Afterwards, I was interviewed by a student team for the local radio station. They made me read a few sentences in English. Their excellent English put my stumbling efforts to shame! 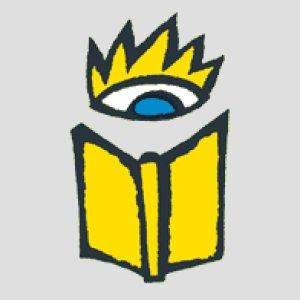 I went from Munich to Berlin, which is a six hour journey, but I didn't mind. It gave me time to reflect, write and do lots of staring out of the window. I stayed overnight in Berlin and did a session the next day at the Gruner Salon in Rosa Luxemburg Platz. Then on the train to the Leipzig Book Fair. The book fair was huge, miles and miles of stands spreading across a bewildering number of halls. 'Home' was the Berlin Verlag stand in aisle D, Hall C. I did a couple of events. A reading with a young German actress and a public event at the fair. I was concerned in case no-one showed up. but plenty of people came along to hear me read and talk about The Fool's Girl. I also met a very self possessed group of young readers from Berlin, representing a network of book groups that operate across several schools in the city. I was impressed by what they told me about how the groups operate. They have their own web sites where they post blogs and reviews. They even had their own business cards! 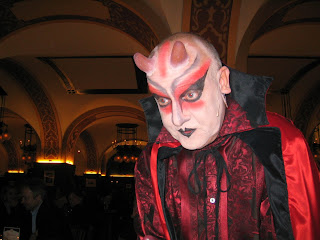 In the evening, I was taken to Auerbachs Keller, a famous beer keller associated with the German writer Goethe and the story of Faust. According to legend, the alchemist, Dr Faust, rode a wine barrel from the cellar to the street with the help of the Devil, or his helper, Mephistopheles. Goethe included a scene in the wine bar in his play, Faust. Mephistopheles was there in person, startling diners and acting out scenes from the play. I couldn't understand a word, but his presence was enough. Thanks are due to Katja Henkel, fellow author, who remembered to bring her camera.
The Book Fair marked the end of my week. I had a great time. I love travelling, seeing different places and meeting different people. I just wish that I'd paid more attention in my language lessons in school!
Posted by Celia Rees at 12:36