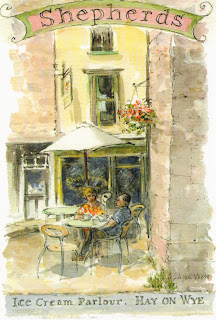 I often buy books now via the Internet, from Amazon or Abebooks, but I was in Hay-on-Wye the other day and re-descovered the joy of browsing. The last time I was in Hay was for the Festival and the town looked very different from those heady days in May. The Festival field was just that, a muddy field, and there weren't many tourists about, but the bookshops were still there, still open, and I really enjoyed spending a few hours just looking, picking up books, attracted by the cover, the subject matter, discovering books that I knew nothing about, but found interesting.

Today, I went to the library. I went in for one thing and came out an hour later with an armful of books that I had not planned to read but which sparked my interest and took my attention. The internet is great - if you know what you want - but you still can't beat a real bookshop, or a library, for those random discoveries that will set off a new idea or introduce you to a writer you did not know before. And Hay has better ice cream!

Ice cream in this weather?