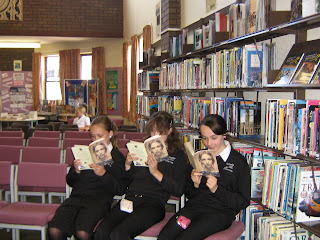 Thought it was about time for an update. I've had a pretty busy summer. I spent the early part of it visiting schools, like Faringdon (see picture of keen readers), talking about my books, especially Sovay. I went on holiday to France for a week and spent another week at a writers' retreat at Charney Manor in Oxfordshire. I was supposed to be getting on with a new book, Illyria, but didn't get all that much done. I don't think that I'm very good at retreating - I enjoy other people's company too much.
I'm Chair of the Society of Authors' Children's Writers and Illustrators Group this year and we had our Conference at the end of August. That went very well, but it took a lot of organising. The hot topic was Age Ranging - whether it is right to put a suggested age on the back of books. Publishers are for it, but a lot of writers (as well as teachers and librarians) are against it, so feelings were running high. I had a bit of a break at the beginning of September, but I was at the Bath Festival last week, and this Monday I was at North London Collegiate School in Edgeware, the oldest girls' school in the country. I had a lovely time there and was especially honoured that their readers' group decided to have a Celia Rees Week later this term.
Tomorrow I'm off to the Saffron Walden Festival and then next week I'm at Ty Newydd in North Wales, acting as co-tutor with Mary Hoffman on a course for people who want to write for children and teenagers. Marcus Sedgwick is our guest writer. I've just finished his latest book The Kiss of Death (what a great title) about vampires in Venice (what's not to like?), so I'm looking forward to talking to him about that.
When I get back, I'm at the Warwick Words Festival on Sunday, 5th October, doing a Writing Workshop. After a whole week of it, I should be full of ideas. The next weekend, I'll be at the Cheltenham Festival. My event is on Saturday 11th October at 5:30, so if any of you want to come along, it will be great to see you there.
Posted by Celia Rees at 15:43

Hi Celia,
Good to meet you today at Warwick Words. I've also blogged about the workshop on my page. Thanks a lot.
Claire

Came here via Claire's and am very envious I missed you at the Warwick Words Festival. It sounded like an excellent workshop.